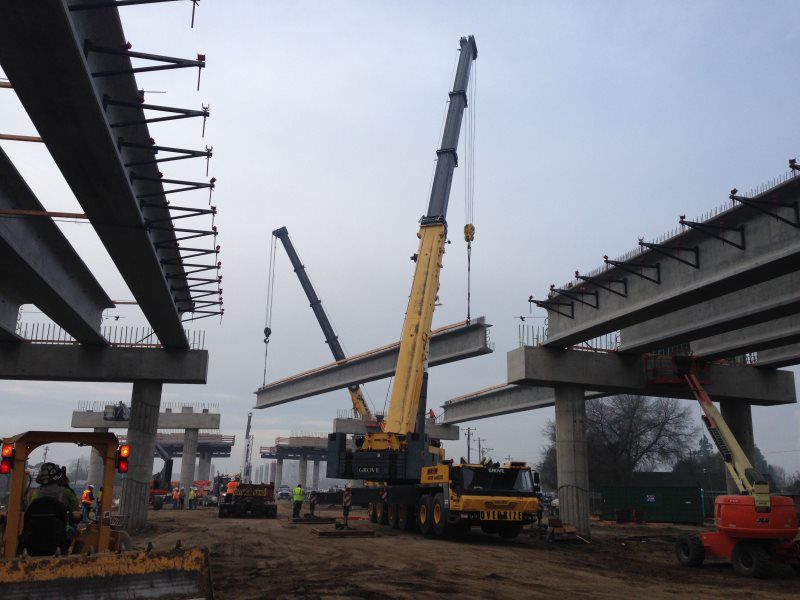 The SR-4 Crosstown Viaduct project is an extension of the existing SR-4 freeway between I-5 and SR-99 in Stockton. The new 2,855ft long viaduct provides an elevated roadway that connects I-5 to Navy Drive and the Port of Stockton significantly reducing the heavy truck traffic through the Boggs Tract residential neighborhood. Funding for the $52 million project was provided by Measure K and Proposition 1B.

The general contractor, Brosamer & Wall out of Walnut Creek, CA, began construction in 2014 and the first girders were delivered in January of 2015. The bridge consists of 184 California Wide Flange girders, which is the new girder section adopted by Caltrans in 2011. The 21 span viaduct has 7 frames with girder depths varying from frame to frame as the spans vary.

The girders were erected in five stages with up to 8 girders being delivered and installed per day. Frame 3 presented several installation challenges due to its proximity to the rail tracks and required night and weekend work.

The use of precast significantly reduced the construction time and enabled construction over BNSF tracks without falsework. The use of welded wire reinforcement (WWR) and self-consolidating concrete (SCC) enhanced the production efficiency and proved to be the way forward in precast girder manufacturing in California. To date this project is the largest bridge project utilizing the new California Wide Flange girder shape and represents the future of bridge construction in California. 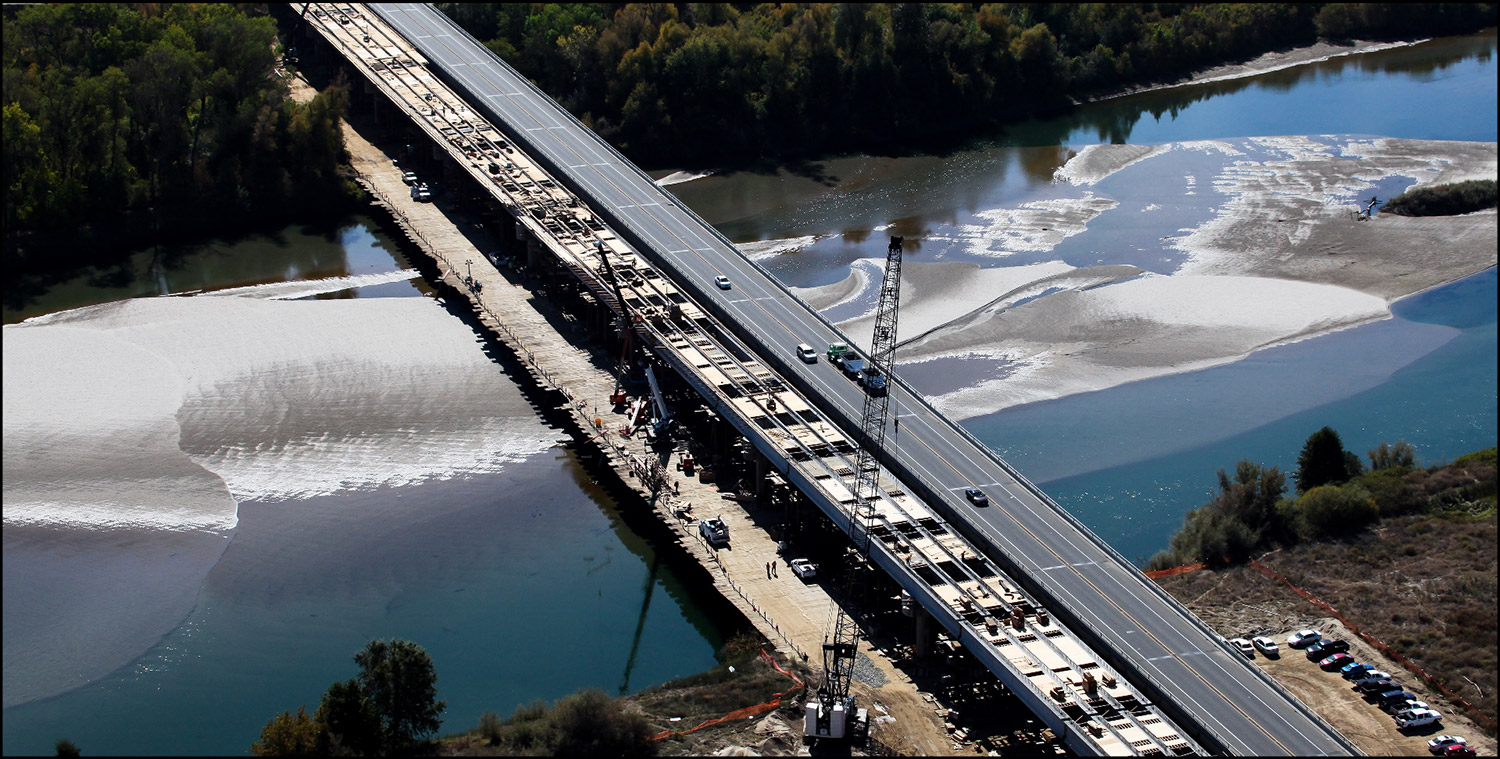 Spliced precast prestressed concrete girder construction has been used to construct the new 16 span, 3,148 foot long bridge structure for the Highway 99 crossing of the Feather River, about 25 miles north of Sacramento, CA. The new bridge is constructed along the east side of the existing structure and will carry two lanes for northbound traffic. The existing structure, having previously serviced traffic in both directions, will be used solely for southbound traffic. This $56.2 million dollar project, improving traffic operations and safety, completes the final four-lane highway link between Sacramento and Yuba City, CA. By widening the highway, the region will be able to meet growing traffic demands in the future and lessen congestion during peak travel hours.
Con-Fab California Corporation fabricated and installed 132 girder segments ranging from 49 to 111 feet in length. The segments were installed in two mobilizations that occurred during the spring and summer of 2013. The unique precast section utilized by the Caltrans designers is an 8’-6” deep bulb tee and is a modification of the standard California bulb tee section. Thirteen of the structure’s eighteen spans measure 210 feet which is among the longest precast girder spans ever constructed in California. In addition to the pretensioned strands reinforcing each segment, multi-strand post-tensioning is used with two-stage stressing to provide continuity within each of the structure’s four frames.
The use of precast concrete girder construction helped mitigate several important site constraints. The bridges’ location, completely within the drainage limits of the Feather River, limited construction access to the site to about six months of the year. Precast concrete construction permitted a significant amount of work to be performed off-site and concurrent with on-site activities resulting in an accelerated schedule for completion. The use of precast concrete also offered a significant reduction of construction activity impact on the site which is an environmentally sensitive area that is critical to the health of numerous wildlife species in the region. 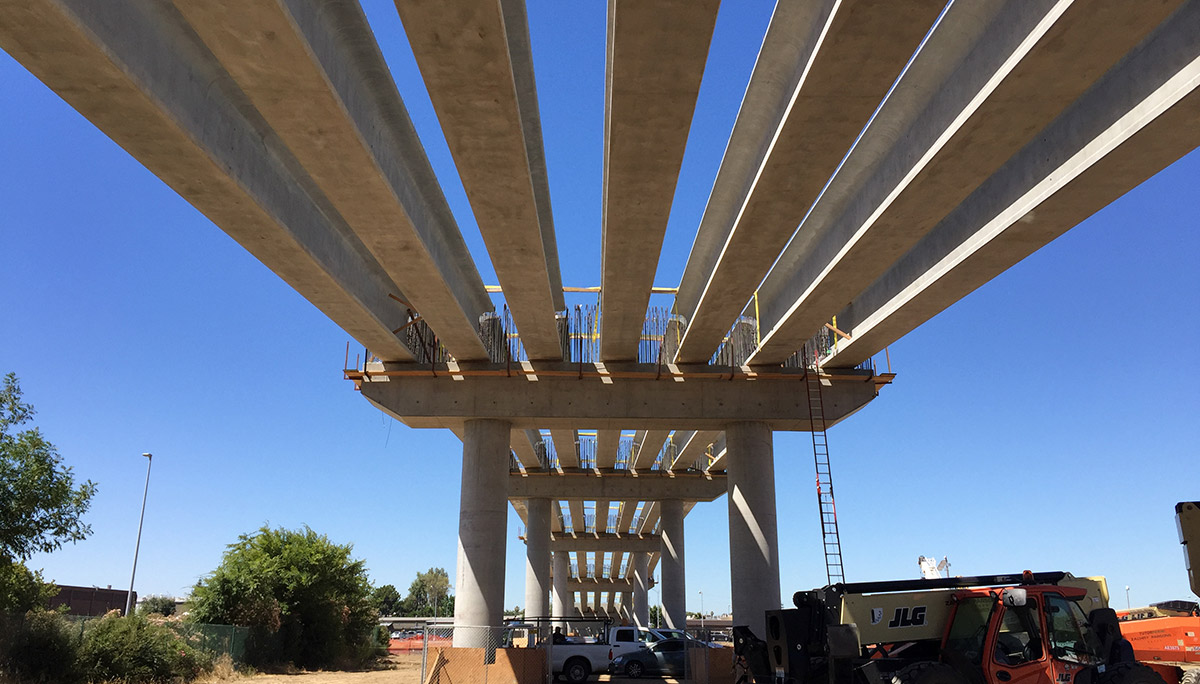 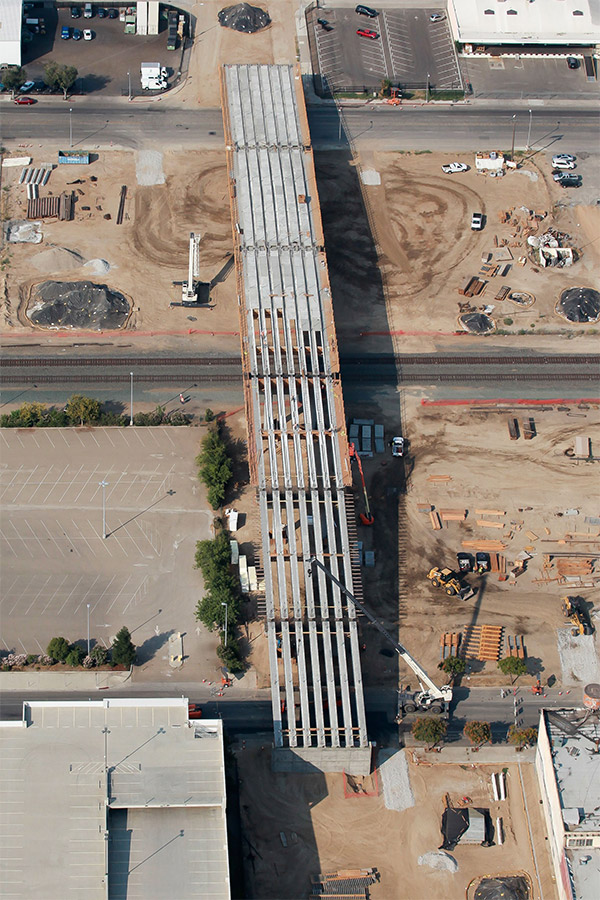 The High Speed Rail Project in California is real and moving forward with the Tuolumne Street over crossing bridge being one of the first major structures to be constructed in downtown Fresno. This road bridge replaced an old 10-span steel bridge that crossed over the BNSF and future High Speed Train tracks. The new structure is a 6-span precast prestressed concrete girder bridge that utilized 72” deep California Wide Flange Girders and 3½” thick prestressed deck panels. Each span has seven girders spaced at 7’-10” on center. The maximum length of girder used was 149ft long and weighed approximately 166,000# each.

The girders were shipped from the Con-Fab’s yard in Lathrop to the site along SR 99 and erection of the bridge was completed in six days using a single crane. The bridge has a significant vertical curve which was accommodated by having a haunch, or cast in place build up, of up to 14” over the top of the girders. Precast prestressed deck panels, utilizing two way pretensioning, formed the underside of the bridge deck. The use of the two way pretensioning allowed the deck panel length to be increased from the Caltrans typical of 8ft to 13ft and therefore less pieces to handle saving time and money.

The bridge is scheduled for completion later this year and is one of several that will be constructed in downtown Fresno for this Phase of the High Speed Rail. 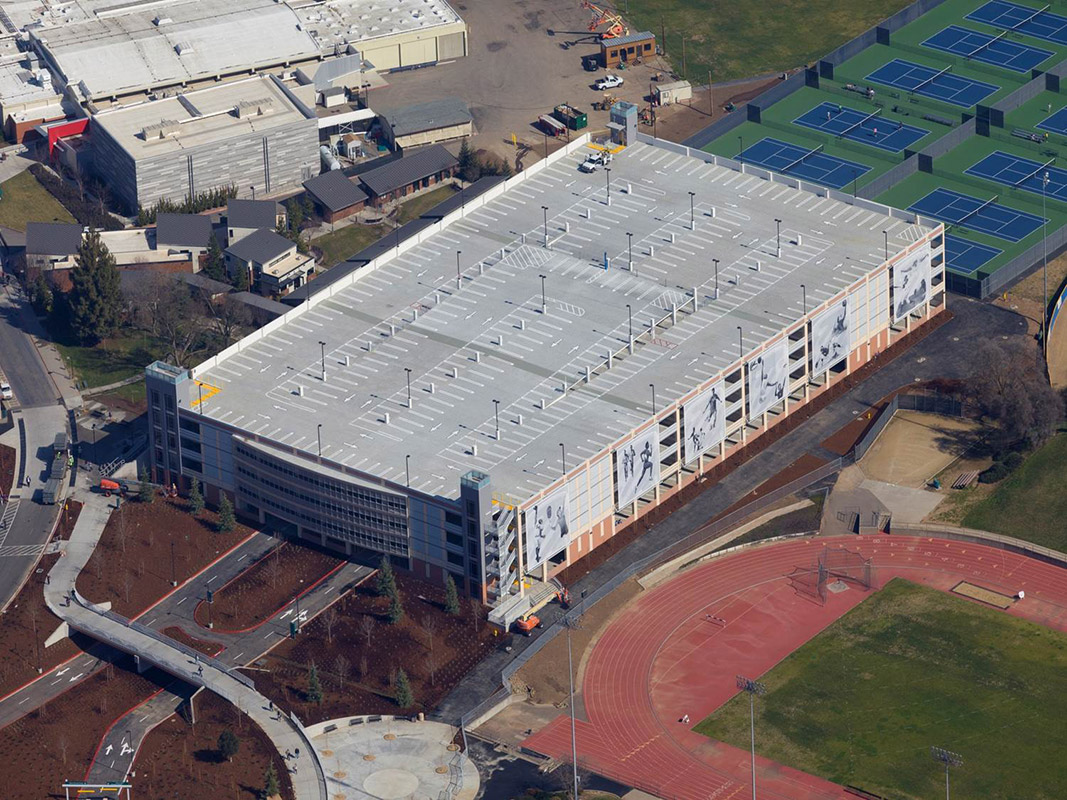 If you’re interested in how Con-Fab can design, manufacture and install precast systems for your apartment, loft, school, office building or warehouse project, please contact our engineering department at engineering(at)confabca(dot)com. 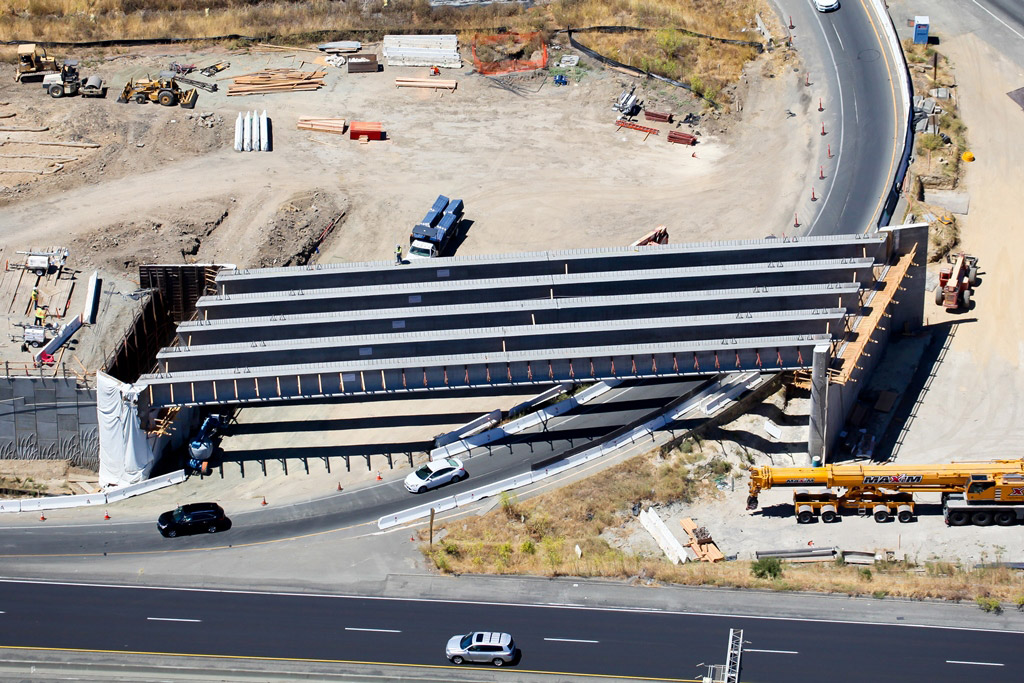 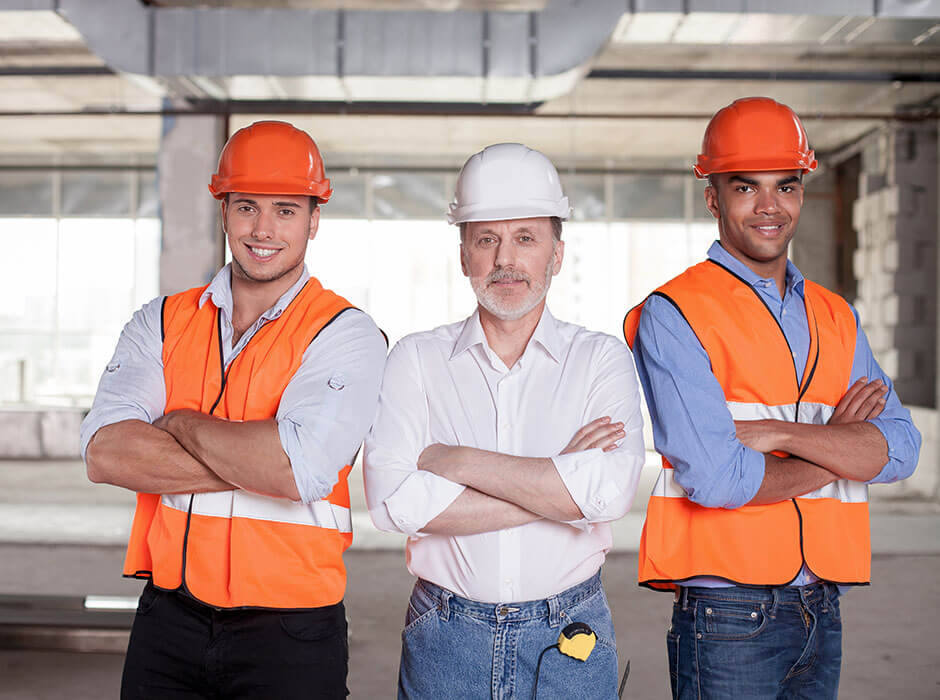 How to choose the best builder for your dream house? 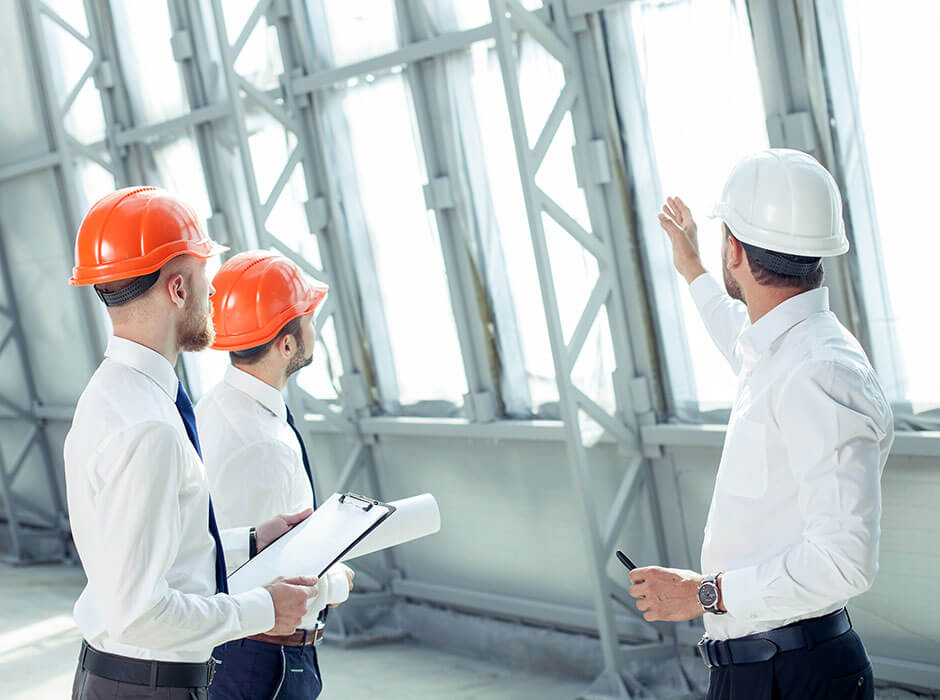 Builder of human happiness for all time